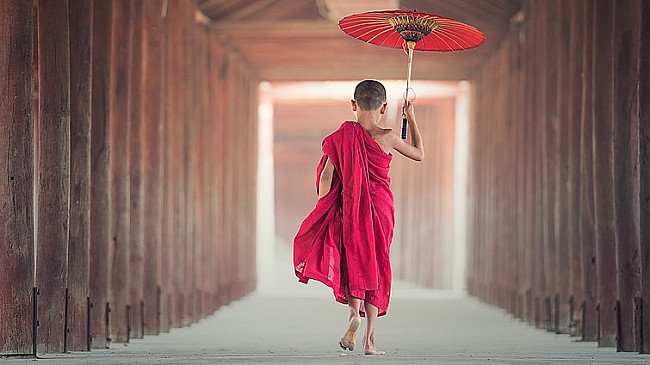 Burma first came in contact with Buddhism with the trade relationship with India. Many messengers and monks were sent to Thaton to spread the teaching of the Buddha by the King Ashoka of India. A trading centre of Southern Burma, Thaton was the main trade hub for trade between India and Burma. This led to the increase of contact with the traders from India in Burma and so did the religious beliefs. The relationship between the traders helped the people of Burma accept the religion of Buddhism as more and more Buddhist monks and missionaries arrived from various Buddhist centers, universities and monasteries in ancient India. Under the influence of these missionaries and traders, the local people began to practice a mixture of Buddhism and Hinduism while retaining many of the old beliefs and local customs they had from before. 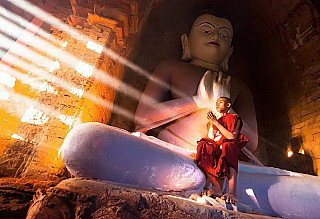 The earliest evidence of Buddhism in the Southeast Asian nation is some inscriptions written in Pali from around 5th century AD. Though Mahayana Buddhism and Tantric Buddhism became popular in the later period of history in Burma, Theravada's stronghold has been very firm. In the 11th century AD, King Anawrahta, who converted to Theravada eventually led to the disappearance of the Tantric Buddhism in Burma. The conversion of faith of the people was greatly helped by the incoming flood of monks and books all the way from the island of Sri Lanka.

View our Buddhist statues in our catalog

Many cities and states like Mandalay, Rakhine (Arakan), Karen, Shan converted to Buddhism following the conquest of king Anawratha. Pagan soon flourished as a centre of Buddhist culture. Regardless of several wars and political unrest, Buddhism continued to flourish under the patronage of various kings. Buddhism soon became a part of life of the common people. Various monasteries established Buddhist schools in villages to spread the wisdom of Buddha to the people of Burma.

The original structure of Buddhist community and monasteries suffered largely when Burma came under the occupation of the British colonial rule in the late nineteenth century. During the administration, the government policies were non-religious. It meant, the monks were not protected by the law. Buddhism was not supported by the colonial government as they tried to impose Christianity upon the local people. This led to the tension between the colonial rulers and local Buddhists. And there was a lot of opposition to the efforts of the Christian missionaries to convert the Burmese people into Christians.

Since the country's independence from the British colonial rule in 1948, Buddhism has regained its traditional place of importance in the life of the Burmese people. Both civil and military governments have supported Theravada Buddhism throughout the time after the independence.

The culture of Burma is greatly influenced by the religion of Buddhism people follow. With plenty of festivals throughout the year related to Buddhism, the rich Burmese culture is one of the most unique Buddhist cultures as the festivals blends the faith of Hinduism, Buddhism and local old beliefs. For example, one of the most culturally important festivals in Burma, the Burmese New year festival, Thingyan, also known as the Burmese water festival, has its origins in Hindu tradition.

Buddhism in Burma is not only famous for its unique history and culture, the Buddhist art from Burma is equally famous all over the world for their sheer uniqueness. Much of the Burmese art has been left unexplored since the nation's military rule and this has made the artifacts ofBuddhism like Buddha statues and Buddha images very popular in the western world. Boasting a rich history of Buddhism, the Buddhist art has helped Buddhism keep its stronghold tremendously in Burma.

The collection of Buddha statues from Burma in our catalog