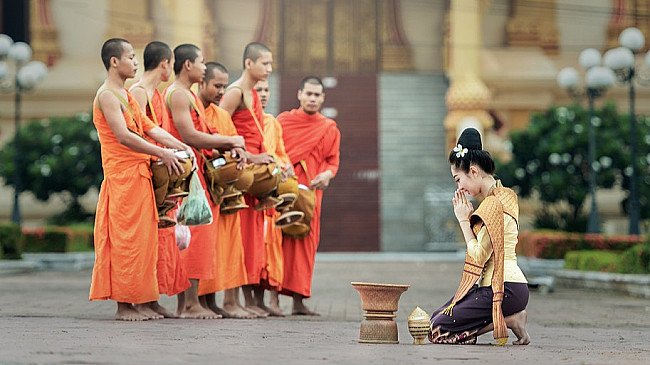 Burmese monks are one of the largest monastic societies in the world. With over 500,000 monks in the nation, the monks are venerated and accepted throughout the society in Burma. Nuns, on the other hand, form an additional 75,000 in this society. Monks in Burma, belong to two primary monastic orders in Burma, the Thudhamma Nikaya which has 88% of monks following the order and the more orthodox Shwegyin Nikaya which has 7% of monks following it. In Burma, it is normal for a person to go into monasteries or nunneries for temporary period of time to be a monk or a nun. The monastic system in Burma is a revolving door as most of the 55 million Buddhists in Burma, whether they are rich or poor go in and out of the monastic life during their lives. The monasteries in Burma have very little to do with ritual or theology. The practical techniques for uncovering the hidden workings of the mind are more emphasized rather than religious ideologies. According to few westerners who have visited these monasteries to practically experienced monasticism, Buddhism in Burma and the Buddhist technique learned in the monasteries offer a power alternative to the hourly fees and drug prescriptions of western psychiatry.

The Burmese monastic orders do not differ in doctrine, but the monastic practice, lineage and organization structure of the monasteries. The other minor monastic orders are the Deara nikaya, Hngettwin Nikaya in Mandalay, both of which have a few thousand member monks in the societies. With 9 legally recognized monastic orders in Burma, there are also plenty of esoteric Buddhists sects which are not recognized by any authority and incorporate non-Buddhist elements like magic, occultism and alchemy. The Burmese monks can be easily recognized in the streets with their maroon colored robes unlike any other Theravada Buddhism following countries like Thailand, Laos and Sri Lanka where it is a common sight to see monks wearing saffron colored robes.

Iconographic representations of monks in Burmese society are quite common given that the monastic society represents a large part of Buddhist following in the nation. The Burmese monk statues are normally carved depicting offering prayers and respect to the Buddha. Regardless of the region of origin, these Burmese Mon statues are carved using different kinds of raw materials like wood, bronze, lacquer, marble, etc. The Burmese monk statues are normally kept on display in the walls on many monasteries and nunneries across Burma.

These sculptures are used to decorate the walls and surroundings of many religious sites like Buddhist monasteries and Buddhist temples as well as old palaces. The images of the two disciples of the Buddha, Sariputta and Moggalla, which are found in monasteries and nunneries in Burma, can be taken as the foremost example. They are kept to inspire the novice disciple monks and nuns as they pay their respect to the achievements of their predecessors. The Buddhist monk statues can also be seen in a free standing position carrying a bowl.

View our Buddha statues from Burma