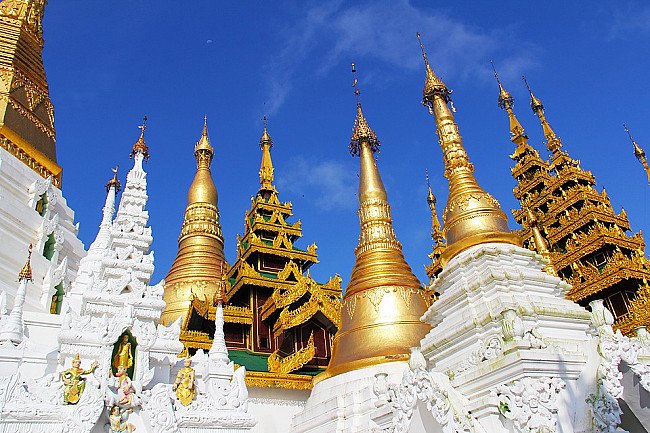 The Shwedagon pagoda is the most important shrine in Myanmar. The golden glow of its main stupa is an unforgettable sight, its smooth curves rising high into the rich blue of the tropical sky. Countless smaller zeidis and pavilions (tazaung) crowd the platform of the pagoda. Some hug the base of the central stupa while others are in reote corners of the platform on top of Singuttara hill. The platform-some 280 by 220 meters – was leveled more than 2,000 years ago, long before the founding of the city of Rangoon (present-day Yangon).

View our Temples / Shrines in our collection

The legendary history of the Shwedagon puts it’s founding in the lifetime of the Buddha Gotama, the 6th century BC. Encased deep within it, there is said to be a golden barge, studded with jewels, in the form of a mythical bird, the karaweik. The golden vessel encloses eight sacred hairs of the Buddha apparently given to two merchants from Myanmar who journeyed to India.

The story goes that it was a time of famine and the brothers had travelled with a boatload of rice that they had placed on 500 ox-carts. The mother of the two brothers, Taphussa and Bhallikam, had died and become a nat. She urged them to seek out the recently enlightened Buddha and receive his teaching. The brothers found the Buddha meditating, and offered him cakes of honey ornamented with golden flowers. When it was time for their departure, they begged the Buddha for a remembrance. He obliged, giving them eight hairs. They placed these in an emerald casket, and then into a pyat-that adorned with rubies. The brothers, after many adventures arrived safely in Rangoon with the relics. A chamber was prepared and they were placed in a cave deep within the Shwedagon Hill.

An understanding of the Shwedagon begins with an acceptance of its legends and history. Both have been part of its sacred nature for over 2,000 years. It will never be known whether the relics indeed rest within the pagoda. In the 6th century BC, the delta area around the city was probably below water, with the Shwedagon’s Singuttara Hill being one of the few elevated places. As such, the prehistoric occupants of the small fishing village that preceded the founding of Rangoon undoubtedly venerated the hill. Over centuries, the pagoda has been continually enlarged and repaired through donations of king and commoner. Royal donations traditionally equaled political sovereignty over the delta area. 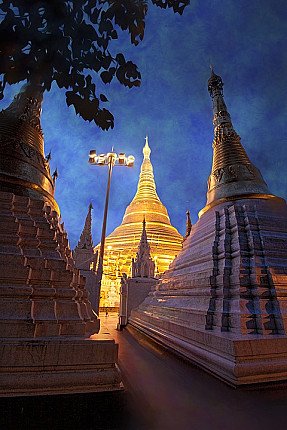 The Shwedagon hill is north of the city’s busiest section, the congested streets near the river front. There are four approaches to the Shwedagon at each of the cardinal directions, but the main entry is the long staircase to the south. Today this opens on to a busy intersection, but it has always been the traditional entry because visitors in the past would have arrived at the city’s port. The Shwedagon Pagoda Road is lined with monasteries (kyaung), rest houses (zayat) and other pagodas such as the Maha Vijaya just opposite the southern stair.

Before beginning the climb up to the pagoda platform, pilgrims and visitors pause to remove their shoes. Shops lining the stairs sell and endless variety of offerings, images and religious texts, At the top, the shade and cover of the stair opens out on to the smooth and wide esplanade that encircles the pagoda. Everyone who visits the Shwedagon comes for a different reason. Some come to gaze upon what seems a magical world of golden forms, tinkling bells, and the quiet chants of those in prayer. Others, as pilgrims, come to the Shwedagon to make a ritual circuit, a circumambulation. Some make this circuit to stop at nine wish-granting images, others to make an offering at their planetary post. There is no fixed pattern to a visit to the Shwedagon, just as there is no apparent “order” to the myriad of shrines on the pagoda platform. All contribute to its character; a unique and vital part of Myanmar’s past and present.

See more of our collection of statues in our catalog