The Untold story of Burmese Lacquer

Many early visitors to Burma expressed astonishment at what they saw in the Golden Land and lacquer vessels are often mentioned in these accounts. For example, Henry Burecy (1792-1845), who was the second British Resident at Ava, recorded the whole lacquer process and noted the superior quality of Shan wares. Sir James Geourge Scott, writing in 1882 under thenom de plume of Shway Yoe, devoted a whole chapter of this famous book, The Burman, to the subject of lacquerware.

Despite this fascination with the subject reliable information has always been hard to come by. In 1985 Sylvia Fraser-Lu published her pioneering Burmese Lacquerware and a revised and enlarged edition of her book appeared in 2000. Also in 2000 Visions from the Golden Land: Burma and the Art of Lacquer was published by British Museum Press to accompany the museum’s exhibition. The book resulted from a successful collaboration between Ralph Isaacs and Richard Blurton and it features many fine lacquer objects from the Isaacs Collection. In addition there have been shorter contributions in various journals, notable Noel Singer’s articles for Arts of Asia. 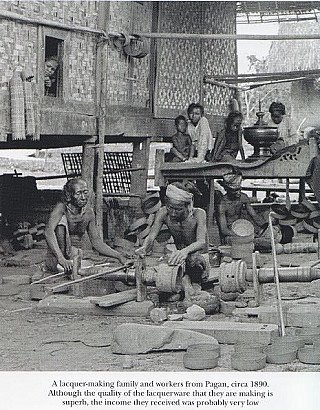 What has been lacking hitherto is a comprehensive treatment of the subject written by Burmese and offering a Burmese perspective and also a description of all known lacquer ware traditions, especially those lying outside the major centers of Upper Burma In Lacquerware Journeys both these lacunae have been filled and in a spectacular fashion. Those who have met U Than Htun at his Heritage Gallery in Scott Market – or better still have visited him and Daw Mi Mi Sein at their Rangoon home will be aware of his first hand knowledge of the subject. In Lacquerware Journeys this knowledge is finally committed to the printed page.

Any work on this scale must be a collective and credit is due to Claudia and Bruno Valsangiocomo who provided major support for this six-year project, to numerous Burmese informants and helpers, and especially to M.R. Narisa Chakrabongse and Paisarn Piemmattawat of River Books. Lacquerware Journeys was edited by Narisa and she has wisely allowed the author his individual voice; the result is an engaging narrative which in places reads almost like an adventure story.

The author begins with a description of the raw material used in lacquerware production, together with the various techniques employed, This part of the lacquer story has ‘been adequately told elsewhere, notable by Isaacs and Blurton, but here a wealth of color illustrations brings the subject vividly to life. For example, a full page color index is provided on page 29 of the book. Non-specialist readers may feel some degree of confusion concerning the lacquer tree which supplies the all important sap. This tree appears variously in the literature as Melanorrhoea usitatissima or Gluta usitata, together with many misspellings and corruptions of these binomials. For the Burmese it is simply sisepin, an indigenous tree which grows widely in Burma.

Two striking facts emerge from Than Htun’s discussion of lacquerware techniques. Firstly, the raw material required seems distinctly unpromising, at least to the outsider. Bamboo is a notoriously difficult medium. Arriving at a Pagan workshop after a month-long journey floating down the Chindwin and Irrawaddy rivers it must be split by hand into ever finer strips before it is woven into the required shape. For the best lacquer ware one-year-old cow dung must be obtained, filtered through strainer and applied to the woven bamboo. Second-grade alternatives involve the use of Irrawaddy mud, burnt peanut shells, more recent cow dung and so on. To this substratum the sticky lacquer must be applied in up to twenty layers, with lengthy drying periods between each application. The process of decoration may then begin, involving the use of such materials as arsenic trisulphide. Even a routine lacquer vessel may take seven months to produce and special piece two years or even longer. Given all this, we can only marvel all the exquisite lacquer items which eventually emerge.

Secondly, surprisingly little has changed in the basic methods of Burmese lacquer production of the past century. One of the interesting historical photographs in the book shows a lacquer making family at work Pagan, circa 1890. This team could be put to work using present-day equipment in a modern Pagan workshop and feel almost immediately at home. (The tour buses outside and the outlandish foreigners emerging from them would be a puzzle.)

Than Htun begins his regional survey in Lower Burma and in this neglected area he has made several important discoveries. The Karen boxes shown are attributed by the author to Muthee and Kwache villages. Arts of Asia readers may remember that some years ago these attractive containers could be bought for a few baht in Bangkok and Chiangmai markets. From Gewdan-She in Pegu region comes very beautiful flattened red hsun-ok containers and in the Nyaunglaypin area. Than Htun discovered the lacquer ware centre and the author identifies three master craftsmen from this area.

Turning to Upper Burma, Than Htun gives a full account of lacquerware from Pagan, Kyaukka and Inwa (Ava), as well as the major Shan centers of Laikha, Inle and Kengtung. Here the author is on well-trodden ground and many of the pieces illustrated will be of a kind familiar to readers. Of particular interest in this section are some rare lacquer items depicting the banishment of King Thibaw and the notorious Queen Supayalat from the palace in Mandalay. Interestingly, the author describes this as a “tragic event”, a view shared by many Burmese.

The Banmuak-Monyin-Wuntho area was virtually unknown as a lacquerware centre until the publication of this book. This remote region lies west of Katha (George Orwell’s “Kyauktada” in Burmese Days) and is inhabited by the Gadu-Ganan people. Than Htun and his team did well to explore this area and bring back new information. The author also visited Arakan (Rakhine) by the arduous overland route, a journey not recommended for the faint-hearted. Here he was able to record the use of hsun-ok to bring food to the local monastery on a daily basis. He remarks that his may be the only monastery in Burma where this 18th century practice is still followed.

Quite apart from its lively and informative text, the book is a visual delight, with more than 650 color illustrations covering the whole range of Burmese lacquerware. Every reader will pick out some favorite pieces from this visual feast – perhaps the rare Pagan container shaped as a durian fruit or a black hsun-ok from Kyaukka collected in 1989. Of this last vessel the author writes, “I could easily believe that it is not the work of humans, but angels…” For this reader pride of place must go to three hsun-ok from Arakan and made in the 1859s or earlier. According to Than Htun not more than twenty of these sensational objects survive in good condition. Can any Arts of Asia reader locate further examples?

Lacquerware Journeys is embellished with sixteen maps, a glossary and a full bibliography which includes seven Arts of Asia articles. To all readers interested in the art of Burma, as well as those intending to visit the Golden Land, I would say: buy this book before it goes out of print.

Julian Harding was born in Calcutta and graduated with honors from Cambridge University. He spent a year researching in Burma, living for several months in a cave near Sagaing. In 1970 he married Barbara Landau, daughter of a well known Hong Kong family. He works as a consultant for collectors, auction houses and museums.

View our statues and others made up of Lacquerware from Burma