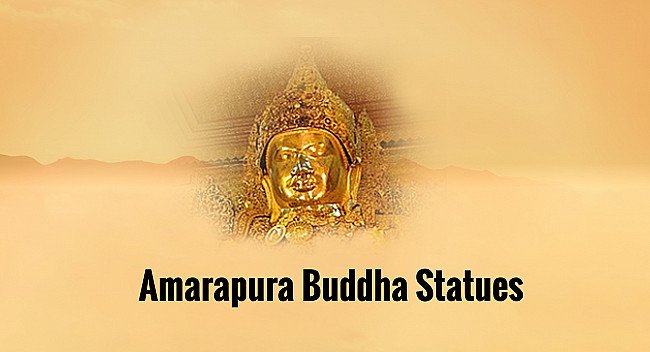 Buddha images from this period called “Pra Nong” in Thailand and have been grouped into the Mandalay period of Myanmar’s history. In actual fact the Amarapura style is a distinctive form of Burmese Art which has never before been defined. Through King Bodawpaya’s demand that the Arakanese sacred image, the Pra Mahamuni Buddha, be brought to and installed in the royal shrine at Amarapura, his newly founded capital, the legacy of Arakan art  is prominent during this period. 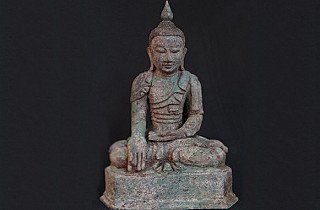 The Pra Mahamuni Buddha became the most sacred image in Myanmar and its muscular torso influenced the Buddha Statues that were made during this period. Crowned images and those made from metal or papier mache were rare in Amarapura art. Instead, the statues were usually made of wood and gilded with gold learf, covered with red lacquer and painted with red color (Chad) and decorated with white glass inlays. (Such decorative styles were inherited from the Tai Yai and  Ayutthaya).

The face, which was round and a bit plump and resembled that of the mahamuni Buddha, was turned downwards. A distinctive feature of these images was the circular pattern on the robe, shins and knees. The Buddha in the Buddha statues would be seated on a pedestal in the crossed-legged position and depicted in the “asking the earth to witness” gesture. The corners of the pedestal would be indented in the pattern of Na Kradan (a Flattened Pattern). Many features of Amarapura art derived from the art of Ayutthaya, brough to the kingdom by Thai artisans held captive in Sagang City and which was readily adopted by Burma.

The Amarapura art period, which occurred at the same time as the Thai Early Ratanakosin period, in which the Thai Buddha Statues were predominantly sculpted, was the turning point of Burmese art. From it sprang the Mandalay art period  producing further developments which eventually saw the birth of Pure Burmese art.