Pagan art developed from that of the later Pyu and early Pagan periods through the following stages:

Buddha statues from this period combine the more distinctive local style with the Pala style from India, introduced via the Mon and Arakanese Kingdoms. 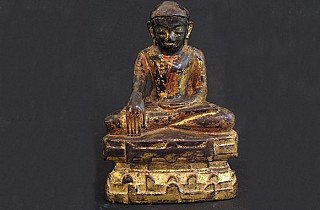 This style included many significant elements in its Buddha statues, for instance the lotus-petal-shaped halo behind the head over the Pra Ghetmala (top of the head), the Buddha’s hair was depicted in the form of small cone-shaped curls and the face was oval to triangular with a slightly pointed chin. The eyes were wide and turned upwards like those of the Chinese phoenix, the bridge of the nose was high and slightly quiline and the lips were small, the lower lip being slightly thicker than the upper (this arrangement is often referred to as “Bird Beaked”). The upper earlobe was curved like the human ear but with small lines carved in the middle; the lower earlobe was elongated over the shoulders, as with other Buddhist Art. It was seated in the crossed-legged position and wore an outer monk’s robe, a Sanghati, wrapped around both shoulders.

Buddhist Art from this period were more heavily influenced by the Pala style of India which had come to the region via the Mon and Arakanese Kingdoms. Though Thervada Buddhism (Hinayana Buddhism) was flourishing in the kingdom at this time, there were also many styles of image created that were still influenced by Mahayana Buddhism. Medieval Pagan Buddha images, therefore, bear many resemblances to both Mon art and Pala art and it is sometimes very difficult to identify the exact school of art from which they came. Although local craftsmen could imitate the style of the Pala images, they could not entirely copy the patterns of the side and lower parts of the monk’s robe but it is the gesture of the Buddha image and the material used to make it, that are the key elements in classifying the style of any particular artifact from this period. The colour of the material used would be less golden than that from India, the gesture and key elements of a Pagan Buddha image would follow the Mahayana pattern and most of them would be portrayed as one of the five Dhyani Buddhas. They would all have the Urna on the forehead and standing Buddhas would be wearing a monk’s outer robe, the Sanghati, wrapped around both shoulders whilst seated Buddhas would be clothed in either the Sanghati or a plain flab across the left shoulder, a style believed to have come from Sri Lankan art. The body of the Buddha would be tall and slender but not as tall as those from the  Early Pagan period.

Buddha statues from this period were generally better refined and before and could also be more easily identified from both an artistic and an iconological viewpoint. The face of the Buddha was more round, the body more muscular, the Pra Ghetmala (top of the head) was semi-circular with a circular Urna on the forehead. Most seated Buddha statues wore a plain flap across the left shoulder whilst most standing images wore the Sanghati wrapped around both shoulders. They were mainly made of bronze, heavy metal, sandstone or wood. Most images sited in pagodas, however, were made from brick sculpted in the ancient Poon-tum style (white plaster-like cememnt applied over brick surfaces). These were high relief sculptures which would be placed in a niche surmounted by a decorative archway (Sum Reun Kaew). This style was also commonly used for Buddha images in the Mon city of Martaban, and the Mon Haribhunchai Kingdom of northern Thailand.

View our Buddha statues in our gallery