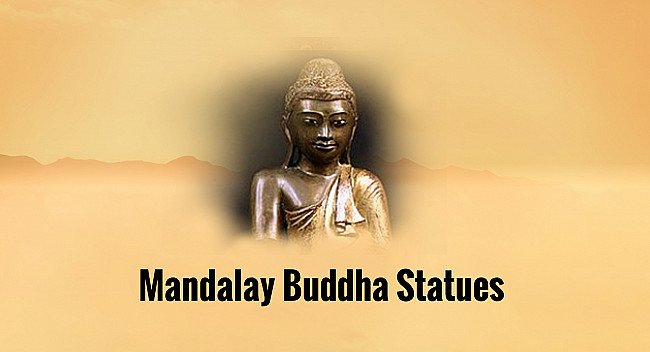 Mandalay was considered the center of the Buddhist universe in Myanmar and thus Burmese Art prospered and developed in this era. The styles of Mandalay Buddha Images and Buddha statues were many since King Mandon. A devout Buddhist, had filled Mandalay with them and through the years Mandalay art became established as the pure art of Myanmar. The techniques used in image making were advanced for their time and iconography employed, very sophisticated. Thai designs of adorned Buddha statues were readily applied, especially the use of crossed breast chains (passing from both shoulders and with a bejeweled medallion) and the patterns used on the robe and on the head-dress around the edge of the crown. Carving patterns of many thai designs were employed, for example, the Pracham Yam pattern cvarved on the rhombus, the Krau Petch (Thai chest armour) pattern, the rattan and fish scale patterns carved on the robe and the Ayutthaya-Ban Phlu Luang style Plog Wong Waen rak Roi (ring shaped wristband with lotus petals) pattern carved on the head-dress. All these patterns were mixed with the Myanmar styles and resulted in a whole range of images each having their own distinctive features, such as: 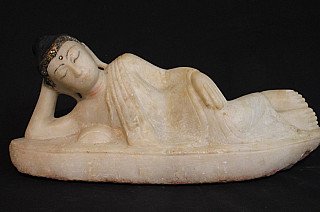 See our gallery of Buddha statues

Mandalay Buddha images were made from various kinds of materials. Some were cast in bronze and some were carved from marble, jade, papier mache or wood. Most adorned images were made from wood or bronze and some styles even used much different material in the one image. The Buddha head, hands and feet would be in marble, the torso would be of wood with a costume painted in black lacquer, decorated with gilt and inlaid with coloured glass. This would be adorned with separate, delicately ornamented pieces made of zinc plate. A very small number of papier mache (Pra Prong) images have been found which have been painted with black lacquer. Gilded and decorated with coloured inlaid glass. The faces of the images were beautified in various ways. Some were painted white, some were gilded and some simply showed the surface of the original materials from which the face was made.

The Post Mandalay period runs from the last days of the Myanmar dynasty to the time when Myanmar regained its independence from the British. During this period, Myanmar art or Burmese Art changed little from the Mandalay style although some branches of art show traces of a British influence, especially with regard to shapes and patterns. The Buddhist Art of this period were less sophisticated with their shape and the pattern of their coloured glass inlays lacking a degree delicacy. This Post Mandalay art, in fact, displays little sign of the soul of the artisan which, in previous periods, clearly announced a strong faith in Buddha and Buddhism.

See all our Mandalay Buddha statues in our gallery