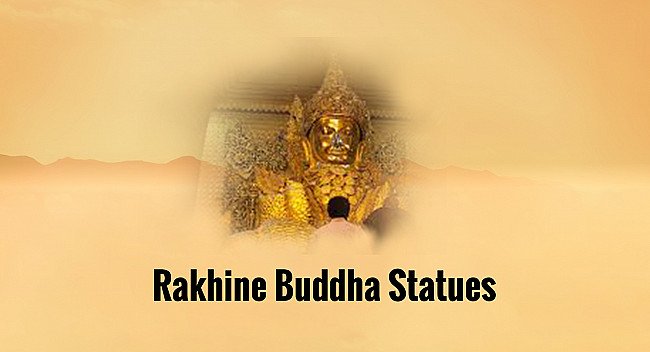 An ancient Rakhine (Arakan) manuscript, the Sappadanapakarana, related that the Buddha Gotama came to Selagiri Hill; at the request of the Rakhine king, he had Thagyamin (Indra) and the divine architect Visvakarman, create an image in his likeness. This Mahamuni Image, was installed in a pagoda by that name at the city of Dhanyawadi, and Rakhine became known as “The Land of the Great Image”. 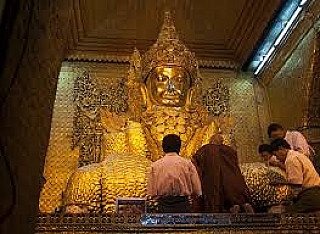 Large pink sandstone plaques of circa the 5th century, found recently at Selagiri Hill and depicting in relief scenes from the Life of the Buddha, bear Gupta and Ajanta influence. Stelas of the same material and period at the Mahamuni pagoda, with bodhisattvas and other figures in relief, give evidence of Mahayana Buddhism in the area. A 10th century terracotta votive tablet, now in the Mrauk-u Museum, shows the Buddha seated on a throne with rampant lions at each side. The Buddha's hair flows smoothly upward into the rounded ushnisha. The design is based on that of a 10th century stone stela in eastern India is like that on votive tablets in the Pyu and Mon areas. Thus Rakhine may have been a conduit for styles from India.

In the 15th to the late 16th century, Buddha statues were corpulent with square faces, eyebrows meeting over downcast eyes, a wide, rounded ushnisha, no lotus finial, robes worn in the closed mode, and seated in paryankasana (one leg folded over the other) with the right hand in the Bhumisparsha mudra. A bronze Buddha now in the same museum and dated in 1588 introduces a tiny flame at the top of the ushnisha. In the following century, the ushnisha and finial became larger and the throne waisted and filigreed.

View all of our statues collections in our gallery

The period from the 15th through the 17th century saw the development of the cult of Amitayus, Vajrayana Buddhism's esoteric Buddha statues of Infinite Life. His attribute is a vase of the elixir of immortality placed on his hands positioned in the Dhyana mudra (meditation gesture). Early bronze images of the crowned Amitayus follow closely the Sino-Tibetan style of the Yong-le period (1403-1424). Later the facial features became more localized in appearance and the royal jewellery more elaborate. Around the 17th century, a new type of crowned Buddha statues, which had a tall staff-like ushnisha and flamboyant nagin (ornamental flanges) at the crown’s side, became popular. This style seems to have spread across the central area to the Shan State. Late in the century, images of Amitayus were created showing him with a tall crown of pointed leaves and seated on a throne flanked by what may be his two main bodhisattvas, and sometimes with the Earth Goddess on the base.