The name “Toungoo Art” will likely be a new term for most students of Myanmar art history. The Toungoo period (1347 - 1596 A.D.) is considered the golden age of Myanmar since the Toungoo Kingdom overpowered and absorbed almost all kingdoms in the whole Suvarnabhumi region (South East Asia). The art of this period has been largely ignored since it followed the defeat of the Pagan Kingdom by the Chinese and the Tai Yai and Myanmar was struggling to regain its independence. After the Toungoo Kingdom defeated the Mons of Hansavadi, they rekindled religion in the area and along with this came a revival in Buddhist art. When King Tabeng Shwe Hti relocated his capital to the old Mon capital of Hansavadi, the Burmese Art of the time mixed once again with Mon art and Tai Yai art and the influence of the Post Pala-Sena art of India, which had been a part of Myanmar art for so long, started to wane. 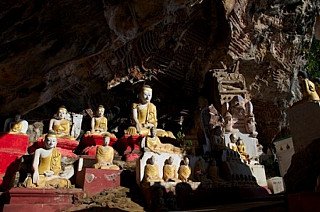 Western art historians refer to the art of this period as “Post Pagan Art”. Some art analysts conclude that Toungoo and Hanthawati art development were virtually synchronous but, for the sake of historical accuracy, it should be recognized that tai Yai art had a strong influence on Post Pagan Art after the Tai Yai Kingdom  took over taken over by the Toungoo Dynasty of the Myanmar Kingdom. Hansavadi was the capotal of the Toungoo Dynasty for 50 years and during that period its art should be considered as being a part of the “Toungoo art” period. Buddha statues of this period shows some changes over that of previous periods brought about by the influence of Mon and Tai Yai art over the local art. The depicted in Buddha images and Buddha Statues became much rounder with a more meditative look whilst the body became more muscular and tended to look plump. The size of the semi-circular Pra Ghetmala (top of the head) was increased and moved forward to the middle-top of the head. In the beginning of this period, the halo was shaped like a lotuc petal but this was later changed to the shape of a buddhing lotus flower an was moved forward as a crown over the Pra Ghetmala, portraying the tai Yai influence.

The hand was on the ground, touching mudra (Pang Marn Vichai) with its fingers instead of touching the ground as in the past now seeming to be shorter and placed on the shin. The base of the image was shaped in the Myanmar style, the thick layers of lotuc petals. This was the first time that Myanmar art successfully broke free from Pala art and gained its own distinguishable style. The Buddha statues of this period should be classified as” The Beginnings of Pure Myanmar Art”. It should be clear from this that Toungoo art was important to the development of art in Myanmar and calling the art of this period “Toungoo art” rather than “Post Pagan art” is preferable. Post Pagan refers to a kingdom that was totally under Tai-Yai control and should surely not be used when referring to a period when the Myanmar people were reviving and re-establishing their kingdom.

View our Buddha statues in our catalog