Home / Burmese Manuscripts / The Life of the Buddha

The Life of the Buddha

View all of our statues in our gallery in Netherlands 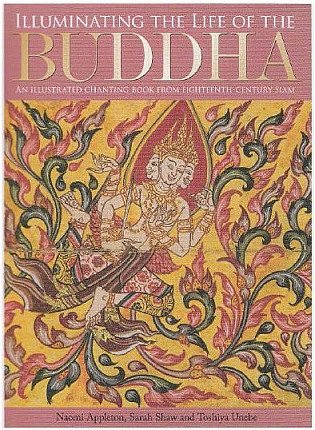 The SLIM volume is about one the treasures – a special Thai manuscript – held in the Oriental Collections of the Bodleian Library, University of Oxford. Housed in an iconic building in the heart of the university, the Bodleian Library is itself one of Great Britain’s great educational treasures. Founded in 1602, it is the largest university library and second largest library in Britain, and is well worth a tour for any visitor to Oxford. Bodleian Library Publishing, which produces books on a variety of subjects related to the library’s collections, has produced a fine book that will give this Thai manuscript the wider audience it merits while appealing to both scholars and the casual reader.

The book opens with a brief Preface by Naomi Appleton explaining how the authors came to cooperate and their reasons for wanting to provide a wider platform for this rare and beautiful khoi paper manuscript that contains forty paired illustrations with accompanying text. This is followed by an Introduction by Sarah Shaw and three chapters, each written one of the co-authors.

In her Introduction, Shaw explains the historical role of this type of concertina-like folding book, called samut khoi in Thai, which is typically made from mulberry paper. A full description of MS. Pali a. 27 (R), which has black lacquer and gilt covers with lozenage design, is provided, including what makes this particular Thai manuscript so special. Probably of less importance to most readers apart from those few able to read Pali Khom script - is the written text. Shaw reminds readers, however, that the "aesthetic and content of the samut khoi are not solely pictoral", and the written text has been an important didactic tool of the Buddhist faith in Southeast Asia. She explains coherently how the artwork complements the written text and that the folding-book would have been chanted, most likely in the course of a communal reading. As a result, this type of manuscript has a more important societal and religious role - as a repository of Buddhist teaching- in illustrating "the adventures of the Boddhisatta (the Buddha-to-be), searching through many lives for the perfections that will help him teach others, to those of the fully awakened Buddha as he teaches".

The next two chapters are the heart and soul of this book, as they contain the manuscript illustrations accompanied by summaries of the stories depicted. Each author provides detailed analysis and explanation of the stories, as well as comparisons with images from other Thai manuscripts held in the British Library and temple murals in Thailand.

The essay "The past lives of the Buddha" by Naomi Appleton explains the great Southeast Asian tradition of telling, or illustrating, hundreds of the Buddha's jatakas, or birth stories. The purpose of these stories is to demonstrate the suffering that the Bodhisattva had to endure in his pursuit of the ten parami, virtues or perfections, required to reach Buddhahood. The Bodhisattva endures these trials with great dedication until the moment in his final life when, at the age of thirty-five, he finally attains awakening. Appleton describes the twenty two illustrated scenes from eleven of the jatakas that are illustrated in the Bodleian manuscript. Ten of these jatakas come from a collection known as Jatakattahavannana, or "Commentary on the jataka", known as the Totsachat in Thai, which are generally the most popular jataka stories depicted in Thai temple murals and manuscripts, whereas the eleventh is lesser known, nut still popluar, tale. Among the Totsachat, the last story of Prince Vessantara’s determination to perfect his generosity by giving away his wife and children has, in particular, become central to Thai Buddhist culture.

In his essay entitled "The final life of the Buddha", Toshiya Unebe notes that it is quite rare for samut khoi manuscripts to contain paintings depicting the final life. Which makes MS Pali a 27 (R) an even more exceptional and valuable document. He compares the final life illustrations in the Bodleian manuscript with those depicted in contemporary temple murals in Thonbury, and searches for clues in the text by comparing it to a Thai biographical text called the Pathamasambodhi and other sources, yet he is unable to draw a conclusion as to why this important period is so rarely portrayed in Thai illustrated manuscripts.

Unebe explains that the period under discussion actually “consists of his final life as a Bodhisattva and his life as the Buddha for the forty-five years between his awakening and his parinibbana (death with no further rebirths) at the age of eighty”. The Bodleian manuscript illustrates eighteen episodes from the final life, mostly in chronological order, and includes paintings depicting him teaching, the miracles that he performs, conversion of key followers, his death and cremation, and the distribution of his bodily relics. All of these wonderful illustrations provide valuable insight to Thai Buddhist iconographic tradition.

The final chapter entitled  "The life story of a manuscript" at times reads like an intriguing detective story, as Sarah Shaw traces the journey of this fragile manuscript from 18th century Siam to late 19th century Oxford, via Kandy and Galle in Sri Lanka and Edinburgh in Scotland.

Shaw begins by providing a background to the role of Buddhist illustrated manuscripts in India, Sri Lanka and Southeast Asia, and compares their development, production and usage, evolving from a simple palm-leaf manuscript to the samut khoi folding-book. The oldest existing Siamese folding paper Buddhist manuscript dates to the start of the 16th century. Shaw examines when the Bodleian manuscript would have been made, its written content and art, and production methodology. By comparing it with the text and illustrations in other contemporary manuscripts and temple paintings, she determines that it would have been produced in the 18th century, without being able to assign a specific year. Further consideration is then given to a number of factors that could assign in identifying a date of manufacture: the declining monastic situation in Sri Lanka- the manuscript was actually found in Kandy - in the mid-18th century; changes in style to Thai samut khoi manuscripts in the newly established Bangkok period after 1782; the manuscript’s exceptional artwork; and the use of mid-18th century color palette that is much subtler than the heavier, richer colors found in 19th century Thai manuscripts. 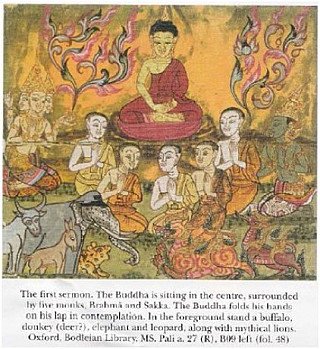 Shaw also highlights the fact that the Bodleian manuscript is exceptional due to the nature of its depictions of the past lives of the Buddha and, even more so, for depicting the last life of the Buddha. Shaw poses the hypothesis that the manuscript may have been commissioned to revitalize Buddhism in Sri Lanka by showing the richness of the Buddha’s lives in Thai Buddhist culture. Consequently, the manuscript would appear to date to the end of the Ayutthaya period, i.e. prior to 1767.

Shaw next leads the reader on an investigative journey to try to identify the actual provenance of the Bodleian manuscript and the physical route it travelled post production. Lack of space prohibits me from revealing details of this journey, but suffice it say that we must all be thankful that this delightful folding-book survived the vicissitudes of war in Siam and British colonialism in Sri Lanka, and eventually found its way to the safe haven of the Bodleian Library where as Shaw clearly states, “It is now recognized as a masterpiece of eighteenth-century Siamese art and craftsmanship”.

This beautiful book will become essential reading for anyone interested in Thailand and its Buddhist art. The prose by co-authors Naomi Appleton, Sarah Shaw and Toshiya Unebe is concise and easy to digest, even for a layman with little knowledge of Buddhism of Thai painting. The lavish illustrations throughout the book-especially those taken from MS. Pali a. 27 (R) - are the real highlight though.

Paul Bromberg has been resident in Asia since 1985, the last sixteen years in Bangkok. He read Modern Chinese Studies at the University of Leeds, and studied at Fudan University, China. He writes regularly about Thai arts and antiques. He is the serving editor of the Journal of the Siam Society and a Contributing Editor to Arts of Asia